I have heard some very bold statements recently.  We suddenly seem to have a lot of climate experts with all sorts of strong advice.

These comments come from people that have best intentions, and in fact, this shows that there is a rapidly growing commitment to address the energy/emission situation.  I share some of the views and congratulate people with some authority that want to act, and not just talk.  But we need care.

Perhaps it is also a good time to have a look at some of the common assumptions for needed change and dig into what they might achieve.  Then take a separate look at what the sources of problems are – and compare the two, to see if we are getting value.

There is an interesting source of data on the Government of Canada website that gives a summary of energy sources and uses in Canada.

First, what are our major sources of emissions in Canada. Figure 1 shows that industry is our largest source of emissions, but close behind is our transportation system.  Between the two areas, they are responsible for more than 2/3 of total emissions.

There is no doubt that our oil and gas industries are significant contributors to this total, but perhaps it is useful to look at the progress that has been made in recent years.

Figure 3 shows a comparison of the emissions created in the preparation and delivery of petroleum from a number of sources, and it is pretty clear that oil sands oil is not as bad as many wanted to believe.

The second source of significant emissions is transportation and almost 60% of total emissions here are from the use of personal vehicles. 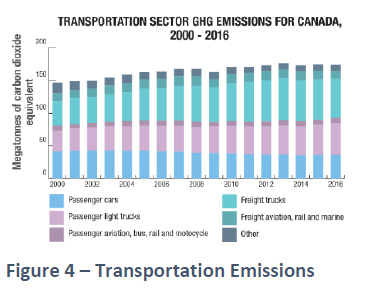 Figure 4 shows the use of transportation fuels and the related emissions.  It is interesting to note that passenger car emissions have fallen only slightly, while passenger light trucks have grown by more than the car emissions have decreased – the total has been increasing slowly but steadily.

Overall, it appears that industry has been investing in methods of reducing emissions and improving their overall efficiency, but the private vehicle owners have made little if any progress. Perhaps this is a significant driver for the implementation of a carbon tax.

The NRCAN website shows that 81% of the energy sources used to generate electricity are carbon free.  Our electric supply is relatively clean, and in fact is far better than the US, that still generates more than half of their electricity with fossil fuel.  In some provinces, the electricity is almost all emission free (BC, Manitoba, Quebec and Newfoundland and Labrador), while in Alberta and Saskatchewan, aggressive programs are in place to reduce emissions, either by displacing coal with gas, or using carbon capture technology.  (Fig. 5)

It appears that there is significant progress being made to reduce emissions by industry sectors while the demand side seems to have achieved little and is happy to assign blame to others.

What am I seeing?

I am seeing a large amount of interest in building new homes that are “net zero” energy.  This may be a very good initiative. I also hear about people wanting to go “off grid.” There are some important issues in personal energy use as follows:

I attended a solar energy conference a while ago and I drove my Plug in Hybrid that I had at the time, thinking that I would charge the battery in one of several spots at the college that were equipped with chargers, and were reserved for electric cars.  To my amazement, all of the spots were taken by – you guessed it – big trucks.

I went inside and listened to people that condemned the oil companies, electric utilities, the government and praised conservation, solar and wind energy.

The hypocrisy does not stop with individuals that drive big trucks!  Governments are also just as bad, or perhaps worse.

The BC Government, with best intentions, required the utilities to implement a 2-tier electricity rate. The first block of energy (about 6-700 kWh/month) were delivered at a low cost, and after that, the price almost doubled.  This was supposed to encourage conservation.  But what it also did, was to make the use of heat pumps, the cleanest and most efficient form of heating, unfeasible.  The city of Vancouver later announced that there would soon be no fossil fuel used in the city, including for heat. Heat pumps would become the primary heating system.

Some US states pushed solar energy, and the result has been impressive.  Many people installed rooftop solar, expecting to sell their surplus to the grid operator.  That has delivered a consequence that was probably not expected but should have been expected.  The solar generation peaks in the afternoon, when power demand is relatively low, and in some cases, the local utility has paid homeowners for their surplus energy, only to have to pay another utility to take the energy because they cannot use it at the time.  But after sunset, they are out looking to buy the same energy back that they paid to have taken away a few hours earlier.  Sounds crazy, but this happens frequently.  The bad news for the utility is the fact that their overall energy sales are declining, but the peak demand after dark is continuing to increase, and that results in a need to expand. But with declining revenues, increased rates are required. Essentially, the solar owners are being subsidized by people that do not have solar.

What Needs to be Done?

I have spent too much time complaining about what is happening – so what needs to be done?  There are all of the usual suspects that you hear from everyone, but I would suggest…

I am a firm believer that if we can get rid of the silo mentality that seems to exist, and stop seeing other groups as “the enemy,” that there is a lot of common ground that can be used to build a far better and cleaner future.